How knowledge is changing, yet again

I always had this romantic notion that my library gives the walls of my living room a dusty intelligent look. That huge pile of covered paper used to be my pride and joy. I meticulously collected fiction, science, philosophy, poetry and art books and thought of it as a window not only into my education, but to my soul. Today, I shamefully admit I read much less than I used to. I focus on non-fiction works, and usually read about 7 of them in parallel, most of which I never finish. Today, my library is a graveyard to the old world I come from.
But this post is not about books. It’s about what those books represent. I no longer read mainly because the source of my knowledge has shifted – from books, to anything online. I consume heaps of written content, but instead of flipping through paper, I now simply scroll down. And while our generation is in an in-between phase as we’re getting to see the paper to digital revolution take place, I’m sure (or at least, hope) my kids will live in a paper-less world. 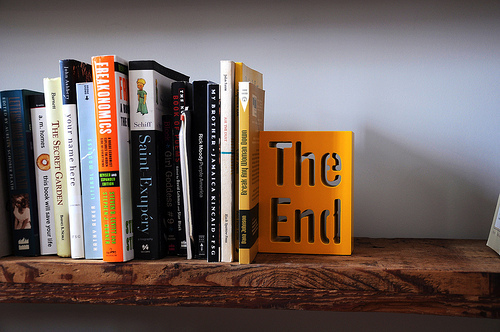 Of course, the world didn’t always rely on paper to spread knowledge. Before Gutenbreg invented the printing press, knowledge was spread in classes, in person. That’s why the invention of print was such a huge deal. It revolutionized the distribution of knowledge and created new forms of media which, in turn, created new industries and business models. Those are in the process of breaking today as we’re shifting to a digital world.
And once upon a time, long long ago, before the invention of writing, knowledge could only be documented, transferred and acquired orally. Just imagine! to learn something, people had to be in the same place at the same time. Once administrations became more complex and financial accounts and historic records outgrew human memory, writing was invented, and changed humanity forever.
Fast forward to the 21st century, and we’re experiencing another revolution. And as with the former ones, those are not only the mediums and the qunatities that are changing, and not even only the businesses and industries around those media, it’s the very core of human knowledge that is changing. What it is to know something. or to remember something. I’ve long claimed that our memory is changing as we now refer to the web as an expansion of our own memory. Recently, researchers at Columbia University have shown exactly that – our memory works differently in the age of Google.

And it doesn’t only have to refer to knowing (or remembering) facts or information. With facebook, twitter and the social web, how we know people is changing too. You can know someone virtually better than you know people you meet IRL (in real life). As Fred Wilson so eloquently put it: “in real life, as if there were anything other than real life“. That’s my point exactly. People keep making the distinction between real and virtual, when in fact they are one and the same. As we’re going through the information age revolution, our very minds and cognition are changing, being augmented by technology.

And what we’re seeing now is just the beginning. I, for one, can’t wait for the day I’ll finally be able to search google straight from my mind. Just imagine, information streams coming directly to your brain at will, and you sift through the results with your own neural activity. Doesn’t that make more sense than reaching out for your iPhone every time?